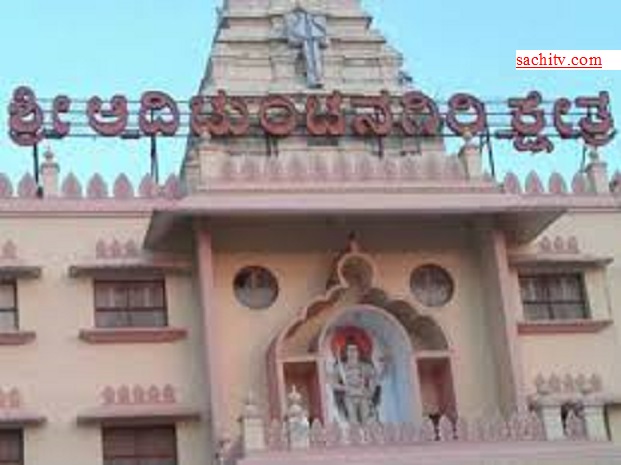 It is believed that if one receives a darshan plus worship kalabhairaveshwara and the deity  it, all his dreams will come true and will be successful in his Life
Sri Adichunchanagiri Mahasamsthana Math is situated on a rocky hill at an altitude of about 3,300 ft. above M.s.l. 110 km west of Bangalore, the capital of Karnataka, India and 6 km from Bangalore-Mangalore National Highway 48.

Kalabhairaveshwara Temple Adichunchanagiri, also called Mahasamsthana Math, is a hill township in Nagamangala Taluk, Mandya District, Karnataka. The Pancha Lingas, the Jwala Peetha, Sthambamba are all held in great reverence by the devotees. The peak point of the Giri (hillock) is known as Akasha Bhairava and the sacred pond by the temple is Bindu Sarovara. Two lakes have been built for the Theppothsava programs. The old Bindu Sarovara was also renovated as per the agama tradition. Sri Kalabhairaveshwara is the Kshetra Palaka of Sri Adichunchanagiri Mahasamsthana Math. Lord Gangadhareshwara is the presiding deity.

The Shiva Purana, inscriptions and the folklore have references to this Kshetra. Legends say that AdiRudra handed over this Kshethra to Siddha Yogi who established the Siddha Simhasana and the Math. The present head, Sri Sri Sri Nirmalanandanatha Swamiji is the 72nd head of this Mutt. Swamiji became the head of the Mutt in 2013. The Mutt grew rapidly under the 71st pontiff jagadguru Padma Bhushan Sri Sri Sri Dr. Balagangadharanatha Swamiji who headed the mutt from 1974 to 2013.

The owner of the Balaji Hotel near the Jog bus stand...