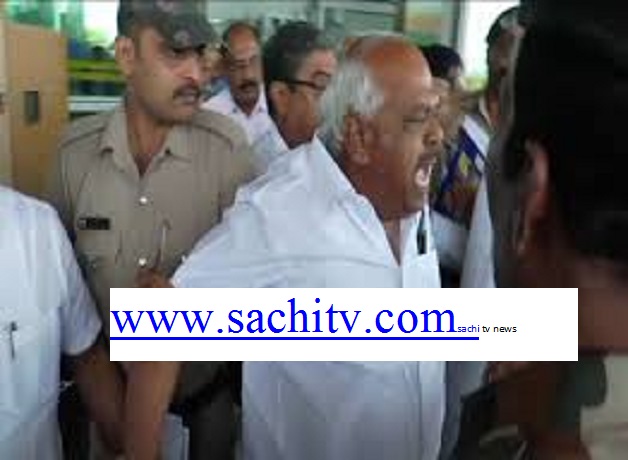 Mangalore: A Congress delegation came to visit the home of the deceased at Golibar in Hydrama district. However, the police have taken him into custody at Bajpe airport.

The Hydrama Congress delegation arrived in Mangalore today to visit the home of the two men who died in police mockery and to console those in hospital. The police have attempted to send him back to Bangalore from the airport. But Congress leaders have refused to go back. Hydrama was created when the police would take you into custody.

Former Speaker of the Hydrama Ramesh Kumar, Basavaraja Raireddy, Ugrappa, MB, Patil and former Minister Sitaram have been taken into custody. Hydramaway has been held at the airport for some time.

Ramesh Kumar screamed at the police. We have not come to do illegal work. We came to condole the family of the deceased. You are upset not to arrest us. This is a battle between police and Congress leaders. Finally, the police took them in their jeeps without leaving them and took them to the local police station.

Hydrama will be escorted from the police station to Mangalore airport in the evening. From there it is possible to return to Bangalore. The police are not allowing anyone to travel in Mangalore because of the curfew.