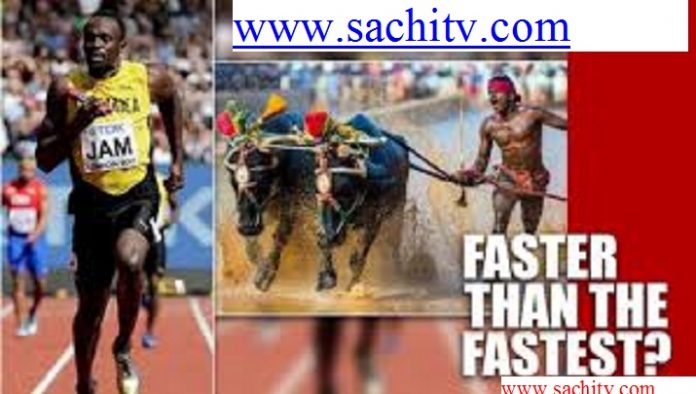 NEW DELHI: A photo of a man slamming sludge faster than Usain Bolt on social media has gone viral.
Buffalo Race
The man, identified as Srinivas Gowda, is 28 years old and hails from Moodabidri in Dakshina Kannada district. According to a tweet, he ran 142.5 meters in just 13.62 seconds in the “Kambala” or the Buffalo Race, which runs in a rotten paddy barn. Statistics say he ran the 100 meters in just 9.55 seconds, which is higher than Usain Bolt’s 9.58 seconds record in the 100-meter run.

Anand Mahindra
✔
Anand Mahindra Tweet
A look at his physique and you know this man is capable of doing extraordinary athletic stunts. Now @KirenRijiju trains him to be a 100m sprinter or we get Kambala to become an Olympic event. Either way, Srinivasa needs a gold medal!

The news has now reached the state sports minister and the minister said he would meet the man.

Kambala, a popular folk sport in Dakshina Kannada, was run by a man named Srinivas Gowda, who has written a new record. Srinivas ran the 142-meter gap in just 13.42 seconds. The time taken for the 100-meter run was just 9.55 seconds. This is the world record for Karnataka’s only rugby sport. Usain Bolt, known as the fastest runner in the world, takes 9.58 seconds to run the 100m. Now 28-year-old Srinivas Bolt has broken the record.

Srinivas Gowda reached the news station on social media when people were talking about Srinivas’ record. The Minister of State for Sports, Kiren Rijiju, addressed the matter. Kiren, who praised Srinivas, said he would take Srinivas to Delhi. He said the speed of the Srinivas race will be checked before the coaches of the Indian Sports Authority in Delhi.

Speaking on social media, Srinivas should be sent to the Olympics. In the Olympics, man’s ultimate power and power is to win. We will not let any Indian talent get lost by accident. ”

Commenting on comparing Usain Bolt to social networking sites, Srinivas said: “People are comparing me to Usain Bolt. He is an international athlete. I am normal. They are all I am. ”
Last year, a man from Madhya Pradesh met Kiren when he got the news that he ran 100 meters in 11 seconds. (Agencies)

Incredible Buffalo Race: Karnataka’s Srinivasa Gowda stuns the world by running 100m in 9.55 seconds …
Many have claimed that Srinivasa Gowder’s time is faster than Usain Bolt’s world record of 9.58 seconds in the 100-meter run. View Karnataka
Anand Mahindra
Anand Mahindra
A look at his physique and you know this man is capable of doing extraordinary athletic stunts. Now both
@KirenRijiju
We train them as a 100m runner or we make Kambala an Olympic event. Either way, we want a gold medal for Srinivas

Kiren Rijiju
✔
@KirenRijiju
I call Srinivasa Gowda of Karnataka for the experiments of top SAI coaches. There is a lack of knowledge about the standards of the Olympics, especially in athletics, which exceeds ultimate manpower and endurance. I will make sure to leave no talent untested in India.

Source: Twitter
In a surprise incident, a man from Karnataka ran faster than Usain Bolt and broke his record. In a tweet shared by a Twitter user, Mudabidri, Karkala taluk Dakshina Kannada a small village man, ran the traditional buffalo race, running 142.50 meters in just 13.62 seconds.