Doddalahalli Kempegowda Shivakumar born date 15-05-1962 is an Indian politician from the state of Karnataka. Personal life Shivakumar married Usha in 1993 and h Arrest of DK Shivakumar central government is Miss using agencies like the ED and the CBI against political leaders . SACHI TV Political News 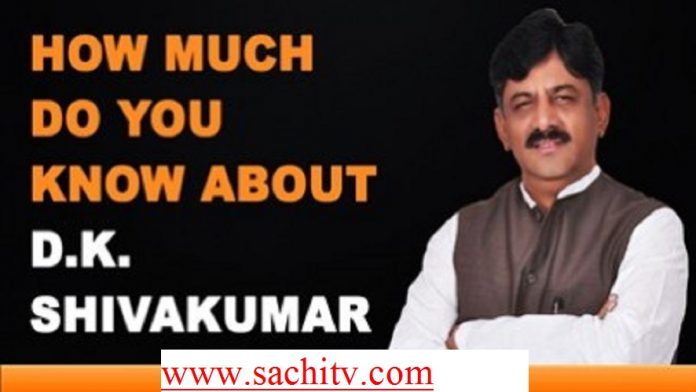 Doddalahalli Kempegowda Shivakumar born date 15-05-1962 is an Indian politician from the state of Karnataka. Personal life
Shivakumar married Usha in 1993 and has two daughters, Aishwarya and Aabharana, and a son Aakash with her. He is a member of the Vokkaliga caste, and his family tradition is to worship ancestors on Ganesh Chaturthi. D.K Shivakumar’s father Kempegowda passed away on 31 Dec 2013.

Corruption allegations
Income tax raid
On 2 August 2017, Shivakumar’s residence and office in Bengaluru were raided by the Income Tax Department in connection with alleged tax irregularities. Eagleton Golf Resort in Bidadi, a town in the outskirts of Bengaluru, frequented by Shivakumar and owned by his brother D. K. Suresh, was also raided. Searches were carried out by 300 officials for a span of 80 hours in 67 locations across New Delhi, Bengaluru, Mysuru, Chennai and Shivakumar’s hometown Kanakapura. It was revealed that ₹8 crore was seized from Shivakumar’s Delhi residence and ₹2 crore from other locations. Central Reserve Police Force personnel were summoned to provide security during the raids. The raid followed after 44 Members of the Gujarat Legislative Assembly from the Indian National Congress were hosted in the resort after a number of legislators from the party quit to join the Bharatiya Janata Party prior to the Rajya Sabha elections. The raids ended on 5 August and reportedly an undisclosed income of nearly ₹300 crore was recovered. He and his associates were given anticipatory bail.

On 3 September 2019, he got arrested on charges of Money Laundering and Income Tax evasion. He has called the charges “baseless” and “politically motivated” done by the BJP Government of Karnataka.

Illegal mining case
In 2015, the High Court of Karnataka issued a notice to Shivakumar, some of his family members, and a few granite mining companies on a PIL alleging their role in illegal mining activities in Kanakapura and Ramanagaram sub-districts.

Political career
His career kickstarted when he defeated H.D. Deve Gowda in 1989 from Sathanur and came to be known as a giant killer and soon became a minister in the government and continued the rivalry in Bengaluru rural region with H. D. Devegowda getting better of him only once during Kanakapura by election in 2002. A member of the Indian National Congress (INC), he was the minister of irrigation in the cabinet of H. D. Kumaraswamy.Previously he served as the Minister of Energy in the Government of Karnataka under the Siddaramaiah Government. He is an MLA from Kanakapura constituency.In 1999 he defeated H.D. Kumaraswamy from Sathanur. Shivakumar also has defeated JDS heavyweight PGR Sindhia in the latter’s bastion of kanakapura when he won the Kanakapura constituency during the elections in 2013 by pulling 1,00,007 votes against PGR Sindhia of JDS who received 68,583 votes.During the 2018 Karnataka Legislative Assembly election, he won by a margin of 80,000 votes.

Shivakumar is also considered as a master strategist credited to having defeated 3 members of H. D. Devegowda family including defeating the former prime minister twice and also defeating H. D. Kumaraswamy and his wife Anitha Kumaraswamy in Sathanur and Kanakapura region. He also ensured his brother’s victory in 2019 lok sabha elections despite Congress being wiped out in the entire state.

Shivakumar is among the richest politicians in Karnataka. While filing his nomination for election in 2018, he declared total assets of ₹840 crore, an increase of more than ₹600 crore from the 2013 election.

Shivakumar is credited to playing critical role in the formation of the coalition government of Indian National Congress and Janata Dal (Secular) in Karnataka following the 2018 election.Earlier he had hosted Maharashtra Congress MLAs during 2001 Congress crisis. Just before election to the Rajya Sabha in 2017 from Gujarat, he assisted his party leadership to move 42 Gujarat Congress MLAs into his resort in Bengaluru in order to avoid them moving to another political party. Subsequently this helped Ahmed Patel to win election.He is also a close confidante of party leaders Rahul Gandhi and Sonia Gandhi.

Alleged involvement in shanthinagar housing society scam
In 2015, land activists accused Shivakumar and his brother D. K. Suresh of grabbing 66 acres of land, meant for the housing of the poor and underprivileged, in Shanthinagar, Bengaluru. However then cooperation minister HS Mahadev Prasad later gave Shivakumar a clean chit, since he found no proof to establish the Sivakumar’s involvement in the scam.

Arrest of DK Shivakumar; Political cunning
The incident is yet another example of political machinations, Rahul Gandhi Former President of the Indian National Congress Said on Twitter. Member of the Lok Sabha Rahul Gandhi has expressed his displeasure that the central government is Miss using agencies like the ED and the CBI against political leaders .

JCB and Jeep crash video The best video of the years...