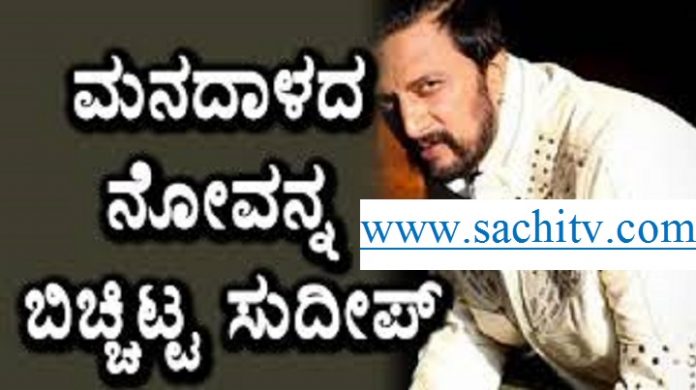 the big boss most saddest moment in kiccha Sudeep life

Dr. Rajkumar a great personality who has worked hard for the survival of Kannada film industry Kannada  film industry Has a huge History and Dr. Rajkumar is the icon of Kannada film industry who fought for Kannada land water and resources
Kannada cinema, also known as Chandanavana or Sandalwood, Karnataka film chambers of commerce Karnataka film industry based in Bangalore Karnataka where more than 250 films are produced in the Kannada language per year. Kannada films are released in  single screen and multiplex theaters across Karnataka
and some of them are also released out of state and country
like the United Kingdom, Australia, United States, England, UAE,  etc the first Kannada talkie Sati Sulochana was released In 1934, followed by Bhakta Dhruva.
Both Sati Sulochana and BhaktaDhruva were super hit Movies.
Gubbi Veeranna could be considered the doyen of Kannada cinema during the mid to late forties.The rise of Dr.Rajkumar in the early 1950’s encouraged the Kannada film industry
to make more historical and social movies. Bedara Kannappa(1954)
was the first Karnataka film industry Kannada movie
it was super duper hit which completed 365 days at the theatres and
it received a letter of appreciation from the government of India.Speaking all about  Kannada film’s piracy. Kiccha Sudeep starrer ‘Pailwan’ hit blockbuster film and producer Swapna Krishna had lodged a complaint with the cybercrime police for the film’s piracy.
Kannada film a copy will go to censor but how safe is censor is not the point
the question is that any Kannada film we have to take a cinema copy and go to Chennai and Bombay for UFO nad Qube etc upload
the whole cinema we should hand over to them at Madras and Mumbai and come back home to Bangalore
the chances 100 % at madras the cinema a copy will go to piracy
because Kannada fil have no hold at Chennai
Bangalore is an international IT Citi But for UFO QUBE upload we have to go to Tamilnadu
chambers and Kannada snags are more concern in the Size of Kannada Boards in shops
if we have to shoot any animal in shooting again we have to go to Madras again no hold so nowadays animals in Kannada cinemas are Lessspeaking about censor again a copy has to go to Mumbai
So what Kannada film Chamber is doing
once Kicha Sudeep Pailwan had gone to Bombay Madras  they will take disadvantage of Kannada cinemas
so we from Sachi tv request Kannada Film chambers ANIMAL shooting permission UFO QUBE Should happen at Bangalore Karnataka India
So we can upload on spot at Bangalore and Bring back the Cinema Copy it is difficult to Go to Madras Mumbai etc
So Kannada Film Chambers Should come into action today itself

WHAT HE SPOKE PLEASE

WATCH THE VIDEO AND SHARE TO KICCHA SUDEEP FANS