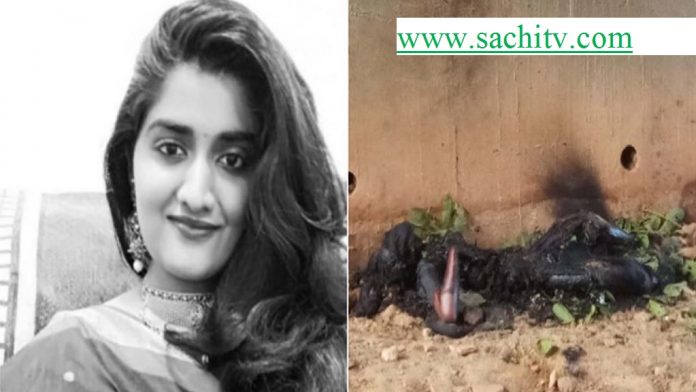 BREAKING NEWS: Doctor by professionPriyanka Reddy  way back home after the duty  was found dead

There are suspicions that the assassins of doctor Priyanka Reddy were initially killed in order to help her.
Priyanka spoke with Sister Bhavya for the last 6 minutes 45 seconds. As if speaking of course. The only thing that can be said is that people are scared to look for help.

It means parking near the grand toll gate, but Priyanka says it is not right to stand at the toll gate, then leave the grand carriage and come home.

“I saw the carriage started. Your tire is punctured, some people come from behind saying you can’t go forward. Even though I thought repairs could be done near the bus stand, they did not leave. Unloaded the carriage and called the boys for repairs. But the boys have returned to the shop, ”Priyanka told Sister Bhavya on her phone for the last time.

The last time Priyanka called me at 9.22 pm, she was switched off at 9.44 pm. After waiting a while, we went to the toll gate, where Priyanka was not. “We also heard in a nearby shop, searched around, complained to the police when they were nowhere to be seen,” Bhavya explains.

What happened ?: Priyanka Reddy Monne, 26, who works as a veterinarian, was on her way home from work on a scooter on Wednesday night. The scooter’s tire became punctured along the way.

At about 9.15 pm, a stranger and some trucks were standing near the toll gate, I was afraid, he called his sister saying that the carriage was damaged. Priyanka had telephoned the grandmother on the phone, saying that some strangers had come to her aid. Then the grand switch made the mobile switch come off.

The incident took place last Wednesday night and Priyanka was found dead yesterday morning. The body was burned with petrol and a marker was found in the locker of the doctor’s body.

A college student has been arrested by the Hyderabad police in the case. Outrage on social media: The death of veterinarian Priyanka Reddy has become widespread on the social network. #RIPPriyankaReddy is the trend.

The last time Priyanka Reddy called was for her sister-in-law. Speaking on the phone, Priyanka said, “Someone stopped me from going in front of strangers and got into trouble with the tire puncture of the scooter.”

What if you get up in the morning and drink hot water watch the video. it’s in the Kannada language?