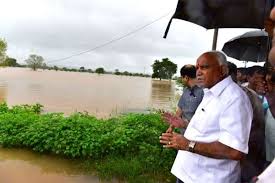 In the village of Darun in Athani Taluk, today, the honorable chief ministers, Mr. B.S. Under the leadership of Yeddyurappa, “Krishna River Delivery in Athani Taluk was held to provide relief and relief to the public.”

Speaking on the occasion, the chief minister said that the plight of the farmer’s relatives who lost their houses in the floods and was in a state of distress and calamity is not comforting. The compensation for the victims of the total loss of Rs 5 lakhs and the Maharashtra model will be taken into account. In commercial banks and co-operatives, nationalized banks are subject to debt waiver. The NDRF compensation scheme is a central plan and it is possible to provide 95,000 compensation to the entire homeless.
5 lakhs will be given to the beneficiaries in four phases. The money will be distributed to the beneficiaries in four stages.

1217 people have been given compensation in the taluk. The remaining 517 houses have to be compensated. The district authorities have been notified.

In this case
Deputy Chief Ministers
Speaking of Athani Taluk, which has suffered the most floods in the Belgaum district and the neighboring Rayabagawa, Kagawada, Chikkodi, Kudachi and Nippani talukas, it is impossible to describe the suffering of the people. And five lakhs of rupees Some people have set a record in political history and some people have questioned where the government has given Rs. 5 lakhs. “It is our good fortune that we have got Rajiv Gandhi and Prime Minister schemes to pay the bills in stages 3 to 4,” he said.
State Minister for Women and Child Welfare, Empowerment of Senior Citizens, Food and Civil Supplies and Consumer Affairs Minister Sasikala Jolle said, “People’s concerns have got us very concerned about the relief of our victims. Yada Tak Due to the flood-affected areas, please visit the Minister of the district concerned suggested to the Chief Minister described it as Chikkodi Lok Sabha MP was also attended by Mr annasaheba Jolla

Delivering relief to people at the meeting and responding to their various demands.

Drinks If you need a liquor store license see details below...