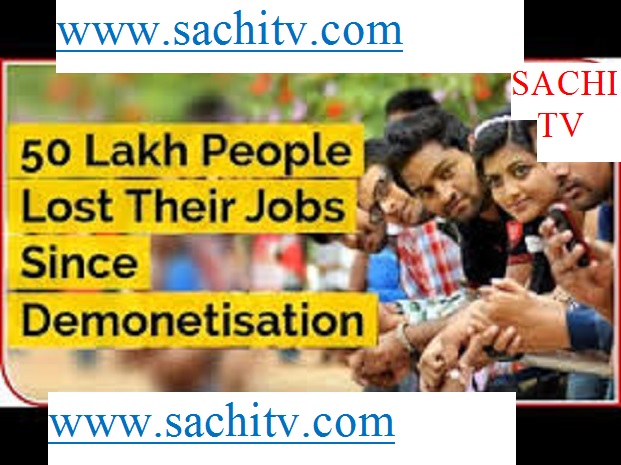 demonetization 50 lakh people lost their jobs in NoteBann in India

Prime Minister Narendra Modi’s government suddenly announced on November 8, 2016, Rs 500/1000 currency
Monetary analysts have expressed concern that the note ban was a complete total failure.
. Concerns have emerged from the study that 50 lakh people have lost their jobs due to the ban of these face value notes.

Report: 50 lakh people lost their jobs in NoteBann in India
But 99.3 percent of the banned notes were returned to the Reserve Bank of India.
Overnight, around 80 percent of the circulation of the country’s currency was lost about 4 years ago
. The NDA government has said it has taken a decision to ban black money and fake notes, counterfeit notes, and storages in Kashmir of these notes.

The 2017-18 Employment Survey, released by the National Sample Survey Office (NSSO), said job losses were at their highest in 40 years across India.

Due to the new policies Loss in Many Companies Garments Car Manufacturing industry Realy estate etc  In India unemployment rate has reached its maximum level of 6 percent.
It is noteworthy that the masses had to stand in queues for several days before the bank and ATM’s.

State of Working India report released by researchers at the Center for Sustainable Employment Azim Premji University released on Tuesday. After November 2016, job losses began. About 50 lakh people lost their jobs due to the Note ban. In 2018, This is more than double the period between 2000 and 2010, the report explained.

According to a report released by Azeem Premji University researchers, 20-24-year-olds are more likely to be unemployed in both rural and urban Sectors. The study included aspects given by the private agency CMIE. The study did not use the Periodic Labor Force Survey, which the central government refused to release in India