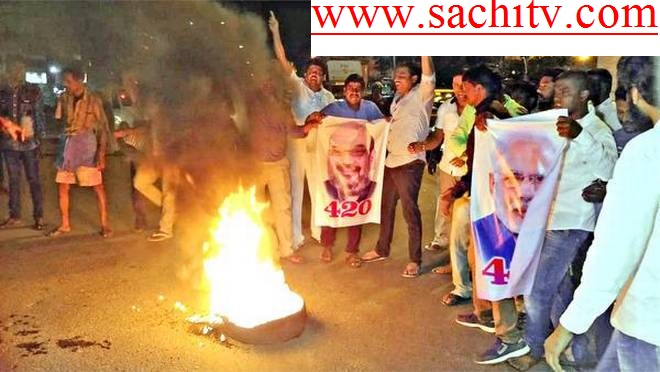 Massive protest condemning the arrest of former minister Shri DK Shivakumar
Congress party, activists
The ideological struggle is going to intensify.
IT and ED are being abused for the hate politics of the central BJP government

With an intention to defame, blackmail and threaten, the Modi govt has launched this politically motivated attack on their opponents.

We stand with @DKShivakumar and will fight this Hitler raj of BJP with all our might.

Doing hateful, cunning politics
@narendramodi
The government has been using the investigative agencies to scam opposition leaders.
Mr. Shivakumar is also a victim of their vindictive politics. He will definitely come out clean and the whole country will understand the ulterior motives of the BJP. We are all with him in this difficult time and shall provide him with full support,” tweeted Siddaramaiah, Congress Legislature Party leader. Former Chief Minister H.D. Kumaraswamy tweeted, “After days of interrogation, without allowing even a day’s break for the festival, the ED now cites non-cooperation to arrest D.K. Shivakumar. The ruling government is using investigation agencies to oppress those Opposition leaders who they think are a threat to their interests.” Senior leader H.K. Patil said despite cooperation in investigation by Mr. Shivakumar, probe agencies arrested him. Speaking to The Hindu from the national capital, Mr. Patil said, “What is the necessity of arresting Mr. Shivakumar when he is cooperating with the probing agencies? Perhaps, he was arrested at the instance of the political bosses.” Protests broke out soon after the arrest of senior Congress leader D.K. Shivakumar by the Enforcement Directorate (ED) in an alleged money-laundering case in New Delhi on Tuesday night. They are expected to continue on Wednesday, especially in Bengaluru Rural and Ramanagaram districts, the strongholds of the leader. The Bengaluru-Mysuru highway was blocked at Ramanagaram and Tumakuru Road in Nelamangala, besides Davangere and Ballari. Kanakapura, the constituency he represents, also saw protests. Four KSRTC buses were stoned.
“I appeal to my party cadre, supporters and well-wishers to not be disheartened as I have done nothing illegal.” Congress workers also staged a protest in front of Lok Nayak Bhavan in New Delhi where the former Minister was being questioned for the past four days and was later arrested. The Congress has announced a protest at all district centres across the State on Wednesday. Meanwhile, Mr. Shivakumar’s supporters have called for a bandh of Ramanagaram on Wednesday.

“Opposition leaders are being targeted each and every day using central government agencies. It is just an attempt to divert the attention from structural failures of BJP government and also to prevent the voices of dissent.
Speaking just after the arrest, Mr. Shivakumar termed the arrest “cowardly” and a “political vendetta”. He tweeted,

@DKShivakumar
We strongly condemn his arrest.

Congress party, activists
The ideological struggle is going to intensify.

Kannadiga Is the fastest Runner than Usain Bolt so Kambala will...