Former underworld don and social activist Muthappa Rai on Monday hinted at retirement from active social life. Clarifying the multiple rumors on his health cond Muthappa Rai needs how Many crores rupees for his treatment  | what kind of cancer he is suffering from | see details | SACHI TV Featured, Health, Latest News 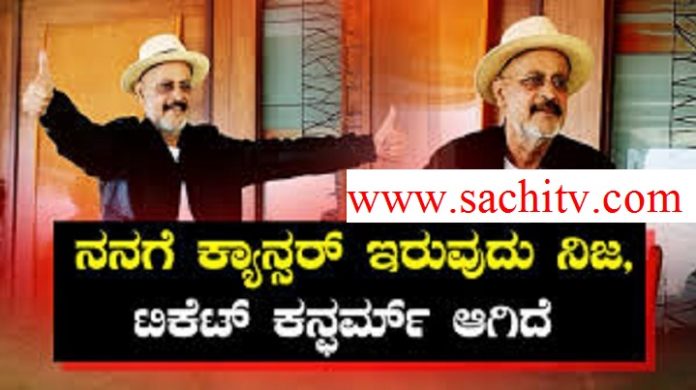 Former underworld don and social activist Muthappa Rai on Monday hinted at retirement from active social life. Clarifying the multiple rumors on his health conditions, Muthappa Rai told media person in Bidadi that he was diagnosed with brain cancer

Earlier, Rai had shared details of his health condition saying that he was told he had liver cancer a year ago and had recovered 90% from it. “However, I was again diagnosed with brain cancer and doctors briefed me that I will only live for a few years and decided to return to Bidadi.” He maintained that he is not afraid of death and will live with will power.

There has been a lot of speculation recently about health. Now Muthappa Rai has answered all these speculations. “Cancer has now spread to the brain. Doctor Nitesh Rohtagi, who treated cricketer Yuvraj Singh, has also been treated with appropriate treatment. She survived the fight with death when five bullets fell on her body. My ticket is always booked. The ayahuasca rests on my confidence. There is no death, ” he said.

7 crore per injection. set of two injections required a doctor in Delhi told him that too that injection is available at America he doesn’t want to take that injection he wants to give that money to the poor people
” The doctors said they could only live six months. This did not shock me. Doctors in Delhi have suggested that injection at a prestigious hospital in the United States would cost about Rs 7 crore and that a cure for cancer would be cured by taking two injections. At 68 years of age, I spend so much money and then live and do what I need to do. I have decided to devote the same money to the poor, ” he said.

He was admitted to Manipal Hospital in Chennai from Chennai for 2 months. When examined, the cancer is again about 1%. The brain was found to be 90% more likely to spread to the brain. Even then, doctors said they could live for 15 days. Finally, I came home and stayed, ” he explained.

Property Will
“I will willingly give property to those who have been with it for many years. I give a site to some activists who have long stood by Benny. I will set up a charitable trust to raise awareness of cancer, ”Muthappa Rai informed.

This disease is not a common disease. This disease of the poor will destroy everything. I don’t need anything. My focus is on making people work. My ticket is Confirm and can go anytime. I have built a large organization, and the organization should not be spoiled when I am gone. They unleashed their helplessness by saying they were going to hire newcomers to the organization.

Corona! A deadly virus attacked Pak Do you know how many...