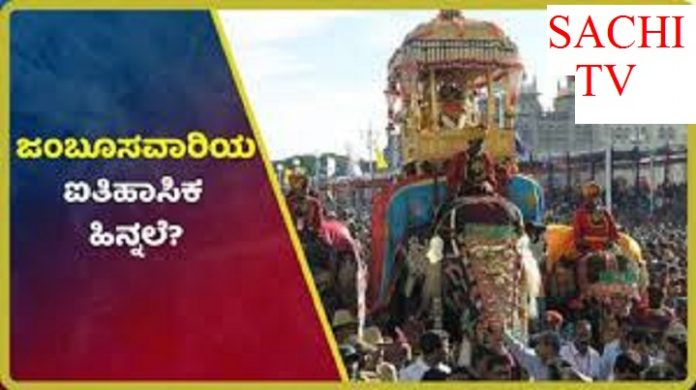 Mysore Dasara  background how it started

Mysuru Dasara is called nada habba (Kannada: ದಸರಾ ಹಬ್ಬ) called state festival (state-festival) of the state of Karnataka in India. It is a 10-day festival, which starts from Navaratri
The Mysore Dasara or the Navarathri is a 10-day festival that falls in the month of September or October. Mysore Dasara is the “Nadahabba” or the State-Festival.
Actually Dasara festival was Started at Vijayanagara
In those days it was as called Mahanavami because mainly festivities to shown in the relief artwork of the outer wall of the Hazara Rama temple of the Hampi Vijayanagar dynasty.

The Dasara festivities began at the time of Vijayanagar emperors as early from the  14 th  Century The festival played a historical role in the Vijayanagara Empire,
The celebrations hosted  singing-dancing athletic competitions horse shows etc, fireworks, charitable giving to the public

The event revered Durga as the warrior goddess of Hindhu Devoyties call as Chamundeshwari also.
Deccan Sultanates, who captured the Vijayanagar to these Hindu celebrations came to an end under Muslim rulers.
After that then The Wodeyars of Mysore formed a kingdom in Southern parts of the Vijayanagara Empire which was very strong to continued the Mahanavami (Dasara) State festival celebration, a tradition started initially by Raja Wodeyar I (1578-1617 CE) in the year 1610 at Srirangapatna.

The festivities included a special durbar (royal assembly) now called kasagi darbar.  which was attended by members of the famous royal family, special invitees, special officials, and the masses.
It was during the reign of Krishnaraja Wodeyar III in the year 1805 when the king started the tradition of having a special king durbar in the Mysore Palace during Dasara
;  After the death of Srikanta Wadiyar in December 2013, this tradition has been continued by placing the “Pattada Katti” (royal sword) on the golden throne. The ninth day of Dasara called as Mahanavami is also an auspicious day on which the royal sword is worshipped and is taken on a procession involving elephants, camels,  horses tabalos where Golden idol of Goddess Chamundeshwari is taken in procession on the Elephant

Girl’s irresponsibility leaked on Secret Camera | Lady made a man...