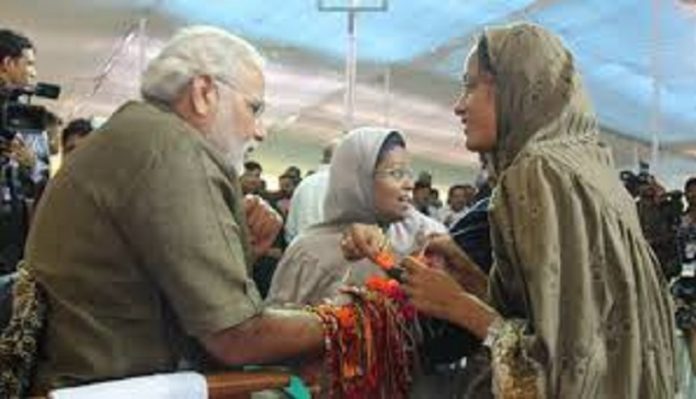 Gonda (UP), Narendra Damodar Das Modi has one son

Impressed by the Prime Minister, a Muslim woman has decided to name her newborn baby

as ‘Narendra Damodardas Modi’ and she tells he is a blessed son of Modi and god.

so he will be the son of god and Modi

Mainz Begum came up with the idea while discussing the boy’s names to keep Modi Name,
Impressed by the Prime Minister, a Muslim woman has decided to name her newborn baby as ‘Narendra Damodardas Modi’.

After failing to convince her mother Minaj Begum against this, the family of Parsapur Mahroor village filed an affidavit seeking registration of the name.

Her father-in-law Idris told PTI that people around her tried to change her mind, but she was adamant.

When her husband, Mushtaq Ahmad, who works in Dubai, informed him, he too tried to abandon her.

But he accepted his wife’s desire.

The family then submitted an affidavit to the District Collector and submitted it to the Assistant Development Officer (Panchayat) Ghanshyam Pandey.

When contacted, Pandey said he had received an affidavit on Friday.

He said the application for the registration of births and deaths has been forwarded to the Gram Panchayat Secretary.

Naming a child is a family-owned business and “no one should interfere in it,” her father-in-law Idris said.

“The law will take action,” he said.
The affidavit praised Modi for his attempt to end Triple Talaq.

In the affidavit, Minaj Begum expressed his appreciation of Modi and his government’s welfare plans, including financial assistance to build free cooking gas connections and toilets for the poor.

“They do a great job for the country,” it said.

Nithyananda care of ‘Kailasa’! What is the new country like?

Again Date Changed Below are the New dates Karnataka SSLC and...