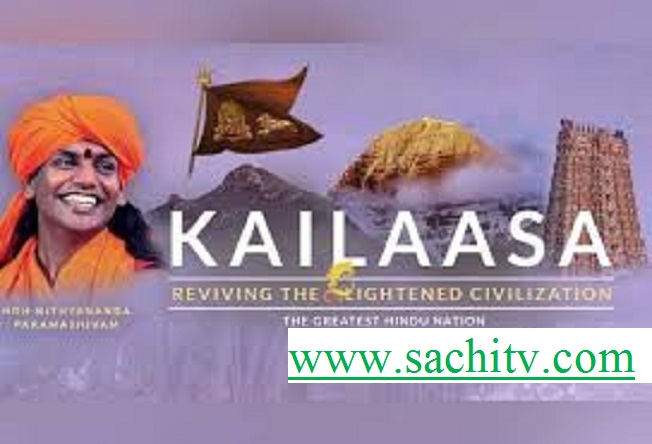 Nithyananda care of ‘Kailasa’! What is a new country like, where is it? Everywhere!

Swami Nityananda Care Of Kailasa Now! Nityananda, who has just bought an island in South Ecuador, has settled down! While India is still a mystery as to how and when to escape, there are many reports of Nithyananda’s new country. In the Ecuadorian country of Latin America, Nithyananda claims to have bought a snow-covered private island. The country is close to the towns of Trinidad and Tobago. Nityananda’s new country is located at the bottom of the US. He named this country ‘Kailasa’.

‘Nandi’ brand Nithyananda! This is the logo for the new country! So come on, let’s get back to the myth of Nithyananda ..!
Nityananda claims that India is a threat to Kailash! So the United States of America has decided to declare its country as a new country. He has created many departments, including housing, defense, commerce and education for the new country. Immigration from any country to Kailash, be it India! He invited all Hindus from any part of the world to come to their country.

About Kailasa
Kailasa is a country without borders, created by exiled Hindus from all over the world who have lost the right to practice Hinduism in their own countries.

It is reported that Nithyananda has set up his own country ‘Kailasa’ despite government agencies looking for him in India. Nityananda claims that India is a threat to Kailash! So the United States of America has decided to declare Kailash its country as a new country

Although the Kailasa movement was founded in the United States, and led by members of the Hindu Adivasi minority community, it was created and is a safe haven for all the practice, ambition or persecution of the world, irrespective of race, gender or gender. Sect, caste, or religion, where they can live peacefully and express their spirituality, arts, and culture free from denial, interference, and violence.Nithyananda’s Sangh (Community) – 715 million followers worldwide
His Divine Holiness followers who have benefited from his meditation, yoga, spiritual and religious-based programs
Worldwide online compliance through websites, YouTube, Facebook, other social media platforms, television programs, magazine subscribers and online students of Nityananda Hindu University (NHU).
Various spiritual services and religious congregations – 45.6 million followers
Followers of monasteries worshiping their ancient ASMT monasteries and their divine sanctity as Avatar (avatar according to Hinduism) and their spiritual master – 66.4 million followers

Nithyananda Swamy
Nityananda Swamy, a self-proclaimed deity accused of rape, is now known to have left his country behind.

It is said that Nithyananda Swamy who fled abroad has now bought a private island near the US and is about to build a new country.

The revival of His divine Holy Nityananda Paramashivam Kailasa – enlightened civilization, great and single Hindu nation. In Hinduism, the science of reincarnation has recognized HDH as the incarnation of Paramashiva at the tender age. Revered and worshiped by millions of people as a living incarnation of super-consciousness, HDH has revealed to the world the great contributions of Hinduism to all the vicious persecution faced by anti-Hindu elements including energy expression, yoga, and temple-based universities. His scientific, progressive, pragmatic human rights approach to life and gender equality. HDH has been recognized as the supreme pontiff of Hinduism, reviving 14 ancient universes, such as Kashi, Kanchipuram and Madurai, and the founder of various universities including the world’s largest Hindu university, Nityananda Hindu University.

He has a separate flag, emblem and a separate passport for this country. Nityananda described it as a Hindu nation. Nityananda has said that the citizenship of Kailasa, the great Hindu nation, must be respected, and he has called for this opportunity!

Although the site of this ‘nation’ is still eerie, its website states that it is “a country without boundaries expelled by Hindus around the world who have lost the right to practice Hinduism in their own countries”.

However, a news report states that it is a private island, purchased by Ethiopia off the west coast of South America, near Trinidad and Tobago. India Today had previously reported that rape accused Nithyananda of fled to Ecuador via Nepal.

Nithyananda from Kailash! Should you go there too? It’s like a Hindu nation!

I am the King, I am the Minister for ‘Kailasa’! My own inscription!

Nithyananda, who was left in lodgings, left Gujarat emptying the land, but the eclipse did not leave his back. Nithyananda, who took up space in Ahmedabad to build a school and set up an ashram at the site. In addition, the children of Janardhana Sharma, who is based in Chennai, has been lodged with the Illegal Custodians. Janardhan Sharma had lodged a complaint with the Ahmedabad police on the issue of four children. Violence is imprisoned in children’s ashram. He complained that he did not even bother to look after his children. Gujarat Police and Women and Child Protection Department officials attacked the ashram. Nithyananda’s four disciples were also arrested. Nithyananda, who is now missing, is out in South America!

In Nityananda’s New Country Kailasa, No Politics is mandatory. In this politically free country, everyone should live to maturity! Nityananda also issued a public announcement to donate to this country, which is built on the foundation of Hinduism. Kailash country passport is also ready. One is gold, the other is red. On top of these are Nityananda and Nandi.