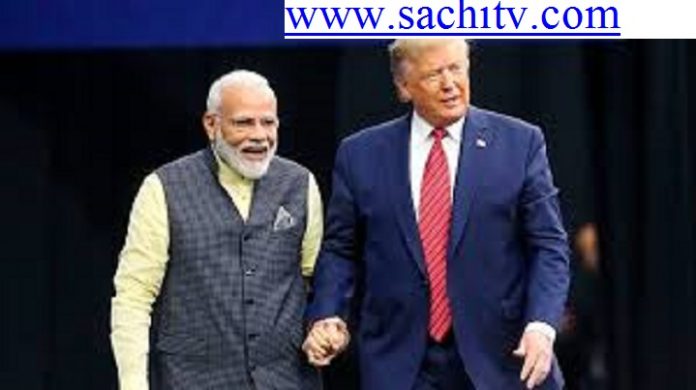 America will always be India’s faithful friend, says Trump ji
Expressing the crowd at the Motera stadium, US President Donald Trump said that he is proud to call Narendra Modi “my friend, he works tirelessly for India”. “America loves India, America respects India and America will always be a faithful and loyal friend to the Indian people,” he said.  will take all action to cut down Islamic terrorist

Happy that India is a partner in India’s progress, says Modi ji Modi Trump pair in Destroying Islamic terrorism fear in Pakistan Terrorist
Thanking Donald Trump, Narendra Modi said, “What you have said about India and its history and culture. I thank you for your acknowledgment. President Trump has not just honored Indians in India but also Indians in the US. Trust between nations is important. In India, we say trust is where friendship is unshakable. I have seen how relations between India and the US have grown. When I had visited the US, Trump told me that India has a true friend in the White House. I am happy that the US is a partner in India’s progress.”

“US is India’s largest export partner. We have the most number of military exercises with the US. US is India’s biggest partner in R&D. India’s digital economy will provide a good space for US to invest in India. India and US are natural partners. We are together in our fight against terror. We are inspired by a long term vision. Our cooperation will grow and we will fulfill the dreams of our nations. We are glad that we could have you and your family, President Trump,” he further said.

India, US will seal ‘very big trade deal’, says Trump
Amid questions raised regarding trade tensions between India and the US, Donald Trump said at the Motera stadium, “PM Modi and I will be making some very big trade deal to boost our countries economy. I am sure that we can reach a good trade. But PM Modi is a tough negotiator. A booming America is great for India and the world. PM Modi has made some significant reforms in India. The world wants to see more reforms.”

watch the video before it disappears

We Offer Safe and Secure Living Spaces for Seniors in Bangalore|Retirement...