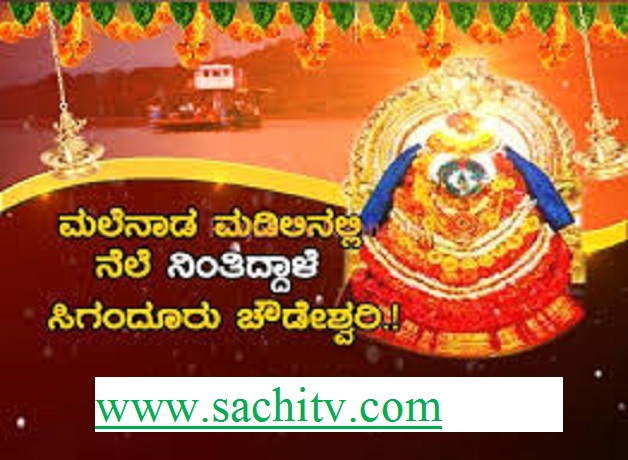 Sigandur Shree Kshetra has located about 40 km from the ocean town of Siganduruttan’s taluk headquarters. The 2 boats that provide transport vehicles, tourists, pilgrims, and local people can provide water connections. The barge service stops every day at 5 pm.

Sigandura is surrounded by water on three sides and is connected by road to one side, which can be reached via Kollur and Nagodi. The barge is an important means of transport to this place.Sri Sigandur Chowdeshwari Temple, Sagar
Sigandoor is a beautiful village and a small village in the Sagar taluk of the state of Karnataka. The main attraction of Sigandoor is the temple dedicated to the Goddess Choudeshwari, also known as the Sigandur Chowdeshwari Temple.
The Sigandur Chowdeshwari Temple is a unique temple where the powerful deity is self-proclaimed. Sigandur Kshetra is situated at Tumari, 42 km from Sagar town. Mother Chowdeshwari is called “Sigandureshwari”.
The statue of Sigandurshtai Sigandureshwari is very old but it was found 300 years ago on the banks of the holy Sharavathi River. She gives peace of mind/prosperity by listening to the humble prayers of believers.
This place has a history of about 300 years. It is said that a man named Seshappa once went hunting in the Jungle near Sigandur and was lost in the forest. While he was resting under a tree, his mother Sigandareshwari came to his dream and asked him to build a temple for him. He went and told his experience to the Brahmin “Duggajaja” of his village. The two eventually built the temple and became the priest of the Duggajja temple and Seshappa’s manager, Sigandur Sri Kshetra, became Siganduruttrasti.
People who have lost their valuables or are facing property disputes reach Sigandoor for relief. It is clear that many economic and personal problems are being solved here. It is believed that the name board from the temple was stuck or stuck in front of their disputed land to solve their problem with the message “Sri Deviya Rakshan Id (which means the land is protected by mother)”.
There are two boats that transport vehicles and people from one end of the shore to the other. It takes about 1 hour and 15 minutes to reach Sigandur from Sagar by local buses. It is said that Sri Veerabhadra, who is in this ghost belt, is looking after Sigandura.
Annual Festival at Sigandoor:
The annual festival (fair) is held every year on Capricorn Day. Devotees from different parts of Karnataka visit the Singandur Chowdeshwari Temple during its annual festival.

The temple premises is only available to a limited number of individuals. There is no food provided by the temple and no private hotels

Sri Chowdeshwari Temple is 40 km from the ocean town of its taluk headquarters. After constructing a reservoir on the Sharavati River, Sigandoor was cut off from Sagar. 2 boats carrying vehicles, tourists, pilgrims, and local people provide connectivity across the water. The barge service stops every day at 5 pm.

Sigandur Shri Chaudeshwari Temple is surrounded by water on three sides and is connected by road to one side, which can be reached via Kollur and Nagodi. A barge is an important tool for transporting to this place.
Every year during the month of Ashada (June – July) a special pooja and worship are held at Sigandoor. Due to the lack of crowd management, thousands of people travel to this place during worship. Sigandareshwari Fair is held on January 14 and 15 every year on “Capricorn” day