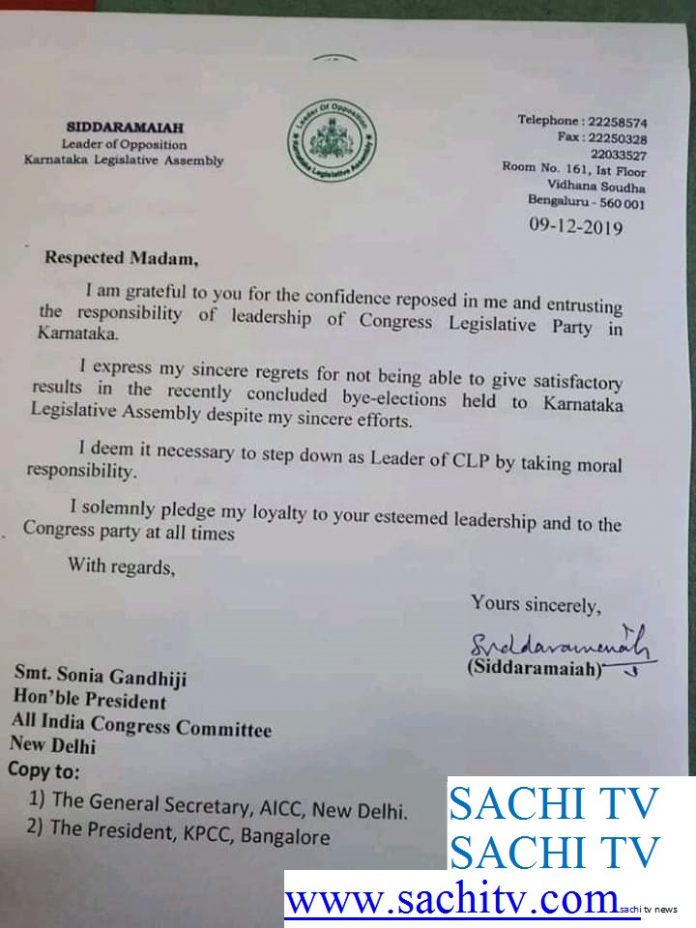 Senior Congress leader and former chief minister Siddaramaiah has resigned from his post as the leader of the Congress assembly and has taken the moral responsibility for the party’s poor performance in the by-election.

In a letter to Interim Congress President Sonia Gandhi, Siddaramaiah expressed his sincere regret for not giving “satisfactory results” in the by-elections.

“I think it is necessary to step down from the CLP leader position by taking moral responsibility”
Siddaramaiah has resigned as CLP leader after a poor showing by the Congress in the by-election. For full details of who won the by-election and from which constituency, Yeddyurappa will be the Chief Minister of Karnataka for 3.5 years because the BJP has a 17-seat congressional majority.
1 CONSTITUENCY GOKAK  CANDIDATE RAMESH JARKIHOLI  PARTY BJP

“As the CLP leader, there is a need to uphold democratic principles. The Congress, which held 12 of the 15 by-elections.

I resigned from the post of CLP leader for the benefit of the party, ”Siddaramaiah told reporters.

By-election Siddaramaiah was like a litmus test for Chief Minister BS Yeddyurappa.

Third day Liquor Sale amount in Karnataka if you Know you will...

all about Makar Sankranti festival in Hindus ! 10 facts about...