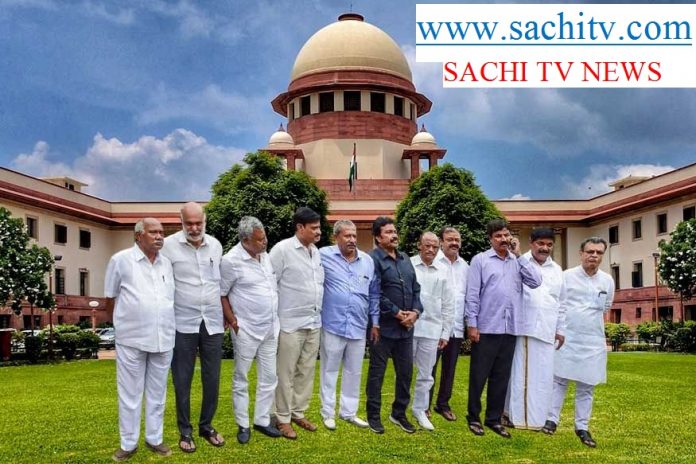 New Delhi : Supreme Court upholds the speaker’s order in case of Karnataka ineligible legislators; But allowed to run for the by-election

NEW DELHI: The Supreme Court upheld the disqualification of 17 Karnataka MLAs who were disqualified on the orders of then-Speaker Ramesh Kumar after going rebel from the last alliance government.

Supreme Court upholds the decision of former Karnataka Assembly Speaker Ramesh Kumar
MTB let the new moon and others be let down by Supreme Court justices
According to sources, the election is an opportunity to contest
The snake did not die
A recent Supreme Court ruling

There will be by-elections for a total of 15 constituencies on D5. The Supreme Court’s verdict on the case of undeserved MLAs was of great importance.
Kapil Sibal argued for the Congress. The three-judge bench headed by NNV Ramana listened to the arguments.

The lawmaker’s move, in this case, is not correct. The apex court bench headed by Justice NNV Raman ruled that the speaker’s order was disqualified.

However, the Speaker of the Supreme Court is also displeased with the move. Even if disqualified, it is wrong to restrict the election. The Speaker told me that until 2023, these MLAs will not contest elections. But this restriction is unacceptable. The tribunal has also ordered all these MLAs to contest the upcoming by-election.
India is a democratic country where governance and opposition are different. Both parties should have morals. NNV Raman said if judging that it is okay to behave one way or another while in the opposition, it would be ironic.

Also, the case had to go to the High Court first. But we agreed to hold a hearing for ourselves here. We also do not encourage legislators’ move.

The verdict was passed in Supreme Court Hall No. 3, where there were more than 60 lawyers.

In the meantime, Congress has given audio to the Supreme Court, requesting that it be considered in the case of ineligible MLAs.

The bench headed by Justice Ramana, who conducted its inquiry, cannot hold a detailed inquiry into the matter. It is said that you will review the documents before issuing the verdict. This was a big disappointment for the Congress-JDS party.

Don’t waste money to mask how to make corona Mask at...