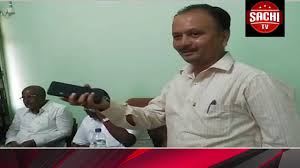 In response to the flood-hit Karnataka victims, the central government has sanctioned an

DCM Dr Parameshwar has commented on the IT attack watch video