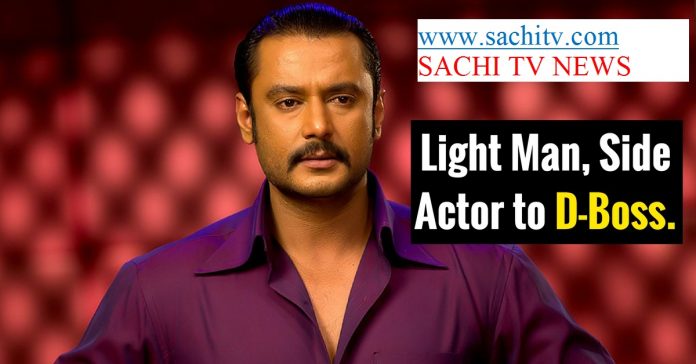 De Bosss difficult life
If you like this video, please share at least who are working hard

who is Currently in the Kannada film industry called Box Office Sultana. He is the son of actor Thoogudeepa Srinivas and Meena born on 16 February 1977. Thoogudeepa Srinivasa is a 1966 Kannada film,  His father often played the roles of menacing villains in the Kannada cinema industry. Against his father’s wishes, Darshan enrolled in Ninasam, a theatre training institute in Shimoga, prior to his father’s death in 1995. Darshan has a sister, by name Divya, and a younger brother, Dinakar, a film director, screenwriter and producer and Look operates Tugdeepa Productions,  the production house,  UpComing Thoogudeepa Productions.

Darshan married his own relative by name Vijayalakshmi, who was later a student in Chemical engineering, in 2003 at Dharmasthala Temple South Canara. They have a son name  Vineesh.
Today Challenging star Darshan is one of the most sought after actors in Sandalwood Called Chandanavana at present. he is the son of popular actor Thoogudeepa Srinivas but to make his debut in the movie was not so easy in the early days,  yes 100 % true it was hard for the aspiring actor to make his debut in Sandalwood.
Believe it or not, During his initial days of career, Darshan had been working as a light boy in different movie sets and looked out for the opportunity in the films.
So the reason Behind is that he is down to earth animal Lover Darshan runs his own zoo Calle Mini in the far east of Mysore, near Malavalli. Darshan is more passions are about Modren cars and bikes.
and charity person it is really nice to have a person like this to have in the industry