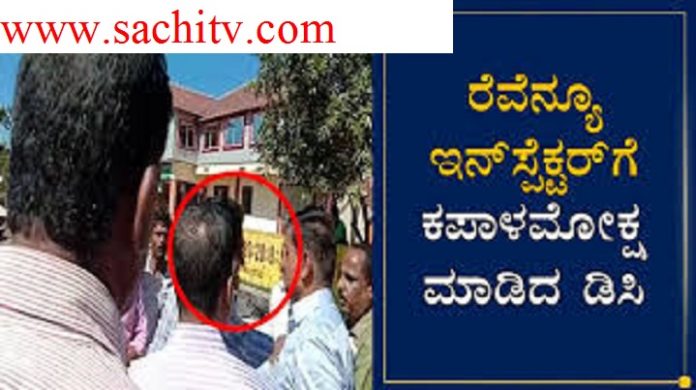 An incident in Hirebail Kalsa Mallamana Balur of Mudiger Taluk in Chikkamagalur District.
Locals who complained to the District Collector about the dues.of Flood Victims etc
People who cooperated with the district during the flood.
Cooperate with the district administration as necessary items are urgently needed.
Audrey has not paid for it yet.
Bored with this development and slapped by DC.
District Collector Dr. Bagadi Gautam Outrage People
The incident occurred in Hirebail, Worcester, where the Chikkamagaluru district collector slapped the Revenue Officer in connection with the flood relief.

The state was hit by a flood last August, but the store-bought ration has not yet been delivered. He complained during his visit to Hirebail that he had not paid for 8 months.

Revenue Officer Ajjegawda inquired about the matter. The money has come from Bagadi Gautam, the government. He questioned why the bill had not been paid.

When the RI (Revenue Officer) did not give an adequate answer, an angry sheriff publicly apologized.

All officials should be vigilant of inspection for Rain victims